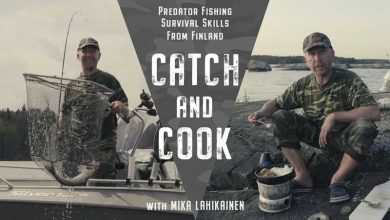 Meet Mika Lahikainen, Finnish outdoorsman and host of Catch and Cook. With over 850,000 lakes in Finland, there's certainly no shortage of fishable water and huge populations of freshwater fish. Mika shows us how to catch popular predator fish like Pike, Zander and Perch and turn them into a hearty meal. Mika fishes on Big Saimaa Lake, on of the largest lakes in Finland, and uses spinning and trolling techniques to find the fish for his meals. Some fish he prepares bankside and some go back to the his kitchen, but regardless you'll find that with the right skills, a humble freshwater fish can be turned into a gastronomic feast. 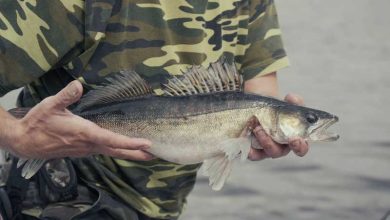 video
Pesto Zander Pasta
20:49
Mika is back on Big Saimaa Lake and finds a deep dropoff on his sonar so decides to anchor up and do some vertical jigging. He catches a small Pike to start at around 9m down. With no other action here, he moves to a spot he's previously marked, a 10m trench where he quickly hooks and lands a nice Zander. He checks the Zander meets the 42cm minimum size limit before despatching it and planning his Zander Pesto Pasta evening meal. Returning to the shore he boils some water and gets some spaghetti on and whilst that's cooking he shows us how to filet a Zander. He then fries the whole filets in butter. After turning the filets over, Mika smears a generous spoonful of Pesto over each one before mixing the mixture with his cooked spaghetti. As the sun sets, Mika is pretty happy with his bankside meal. 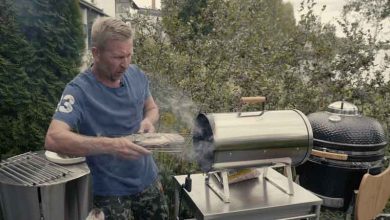 video
Smoked Bream
21:52
Today Mika is going to set a longline fishing trap on the lake and see what he can catch. He's already saved some worms from his garden and now has the unenviable task of putting them on 100 hooks. He then sets out on his boat and finds an area near the shore with a steady depth before setting the trap and leaving it overnight. With a couple of Bream caught, Mika decides to smoke them as this will give them a better flavour. He guts the Bream before adding to the smoker which is prepared with wood chips, juniper and sugar. Afetr 30 mins the ream is smoked and once cooled he sits down and enjoys his fish with a dark beer. 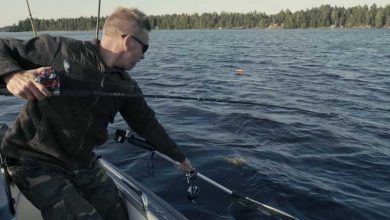 video
Perch & Pike Korean Style
21:00
Today Mika going to cook Bulgogi, a Korean dish that is normally made with beef but also works well with lake fish. He's trolling on Lake Saimaa and starts things off with a nice Perch. This is quickly followed by a decent sized Pike which gives a good fight on his light tackle. Mika heads to shore with his catch and gets ready to cook up his feast. He firstly makes a marinade of chopped leeks, ginger, garlic, soy sauce and brown sugar before carefully filetting his two fish. He cuts the fish into strips and then adds them to his marinade to take on the Korean style flavours. Finally he adds the mixture to a hot frying pan and cooks it thoroughly before serving with some boiled rice. 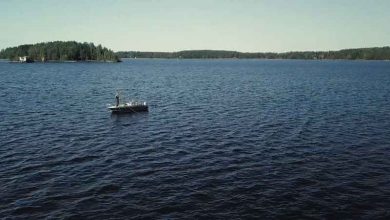 video
Zander Risotto
20:43
In this episode, Mika is cooking Zander and firstly heads out on his boat to check his net trap. He finds a small Bream which he'll use later to catch Crayfish, before getting a nice 1kg Zander. After filleting the Zander, Mika cuts it into strips and fries them in some butter until crispy so they don't break up too much in the risotto. He has previously prepared a stock using the head and bones of the Zander, and uses this in his risotto gradually adding it to the risotto rice. Once the risotto is underway he gradually adds some chopped tomatoes and parmesan before adding the fish. Towards the end he adds some finely chopped garlic and parsley and hey presto, his Zander Risottto is ready. 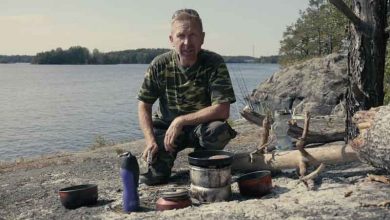 video
Fried Perch in Butter
17:39
Today Mika is planning to fry up some small Perch for a bankside lunch. The most effective way of catching them is via traps and a longline net, so the rods are left at home this time. Mika checks his first trap which has around 10 small fish before heading out onto the lake and seeting hs net in some deep water. He then heads to shore and after cleaning his catch, he fries the Perch in some butter and bay leaves. Forgetting his cutlery, Mika decides to find a suitable dead stick in the forest and whittles a pair of chopsticks to eat his perch lunch. He also toasts some bread to dip and enjoys an al fresco perch lunch. 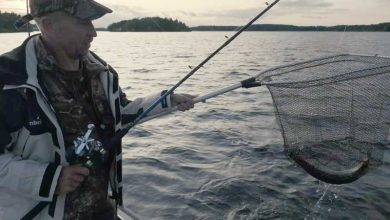 video
Pike Cutlets
21:19
Mika is out trolling on the Big Saimaa Lake, looking for Zander or Pike. He starts by catching a small Pike which he duly releases, before something bigger bends over his rod and puts up a good fight on his light tackle. Its no monster but Mika thinks it will make a good meal so he keeps it for the pot. Returning to his kitchen, Mike skins and filets the Pike before cutting into strips which then puts through a mincer. He then adds 2 eggs, breadcrumbs and some curry powder which he kneads together and then forms into the cutlets. Next Mika frys the cutlets in butter and olive oil until golden brown, before removing them. As final step, Mika heats some teryaki sance in his pan and glazes the cutlets in it. Voila, the strong Pike flavour is masked and Mika enjoys his Oriental Pike Cutlets. 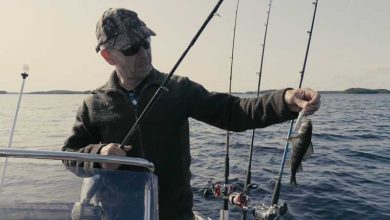 video
Pan Fried Perch
21:26
Mika heads out on on Big Saimaa Lake at Palvainniemi today fishing for Perch. He hasnt fished here for a while due to the recent strong Northerly winds but today is calm so he has high hopes. This lake is deep and he expects the fish to be at 6-8 metres but will be searching until he finds the right depth. With a high population of Vendace here, he's using lures that imitate their colours with much brighter lures at depth. Mika starts by trolling, using weights and a deepener device to get to the perfect depth. Its a slow start with just one small Perch for the pot so Mika heads for some protruding rocks in the middle of the lake, moors up and tries throwing some spinners. He catches another small one before heading to shore to make dinner. He's planning to pan fry them, so firstly part boils some potatoes before pan frying them in butter. Next he rolls the fish in a rye flour and salt mix before frying with the potatoes. Its a simple dish but tastes all the better outside in the Finnish evening sun. 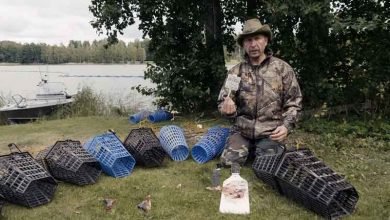 video
Boiled Crayfish
21:52
Today Mika is without his rods and instead planning to get a head start on the Crayfish season. He starts showing us how he prepares his traps with some Bream as bait, before heading out on the lake on his boat. After finding a good rocky spot in around 5 metres of water, he places the creels out in the water. Typically Crayfish are found in numbers in shallower water but by going deeper, he thinks he's more likely to catch the bigger ones. He returns 24hrs later and collects 10 nice looking Crayfish from his traps which he then transfers to a larger pot that he's filling with crayfish for a few days. Mika then shows us how he likes to cook these Crayfish. He firstly boils a large pan of salted water into which he adds Crown Dill and a can of dark beer before adding 5 or 6 Crayfish which he cooks for 5 minutes or until they float to the surface. Once he's removed the Crayfish, Mika adds more Crown Dill to the boiling water before letting thr pot cool down. He then adds the Crayfish back into the water and puts the whole pot in the fridge overnight to further impart flavour into the Crayfish. Finally Mika, sits down at the table and shows us exactly how he eats the Cayfish, getting every last delicious piece of meat out. 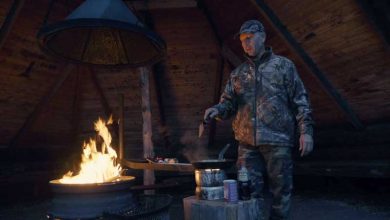 video
Pike Curry
22:00
Mika is lake fishing again and heads out on his boat looking for some nice Perch or Zander using jig head soft plastics. After a slow start, Mika finds some deeper water around 5m deep and sees some fish activity on the sonar. The Perch aren't playing ball but Mika does hook into a strong Pike which gives him a tough fight on his lightweight Perch outfit. Mika then heads to shore and shows us how to fillet the Pike before taking it to his lodge kitchen. First, Mika cooks some curry paste in hot oil before adding the Pike strips and filets. Whilst the fish cooks through, Mika adds some chopped red pepper plus some leek rings, garlic and fresh chillies. Finally, he adds some coconut milk and some green beans before simmering for a few more minutes. Et voila, Pike Curry is served, who would have thought. 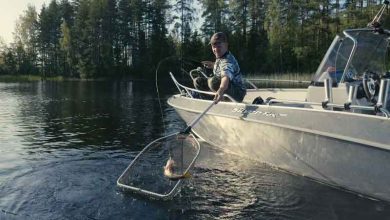 video
Rantakala Perch Stew
21:42
Host and outdoorsman, Mika Lahikainen kicks off the series with a Perch fishing trip on Lake Saimaa, the largest freshwater lake in Finland and 4th largest in Europe. After setting out in his boat, he finds a deep 6m hole on the sonar, and starts fishing with a vertical jig, hoping to find a big Perch or Zander that hunt around these kind of features. With little initial interest he changes tactics to a spoon, which is often a reliable Perch catcher, and drifts along the reed lined shoreline making casts into the edge. After chopping and changing lures a few more times, Mika is finally rewarded with a small Perch which he keeps for a 'Rantakala', a traditional Finnish fish stew, before he then lands a larger 1/2 kilo fish. After catching a few more Perch, Mika heads to the shore to cook his Rantakala over an open fire. After gutting and preparing the fish, he drops them into some boiling water, before adding potatoes, carrots, onion, bay leaves, dill, salt and pepper to the one pot stew. As the sun sets, Mika settles down by the lake shore and enjoys his Rantakala whilst reflecting on a tricky day's fishing. This show is presented in Finnish with English subtitles