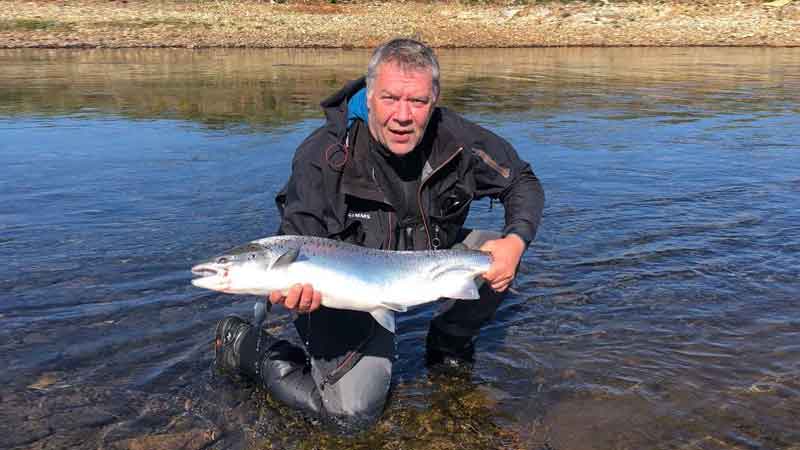 Icelandic Tails, an exciting new fly fishing show from Iceland launched on Fishing TV last week so we thought we’d talk to Producer, Eggert Skúlason and find out a bit more about it. The show also airs on national TV in Iceland and is called Spordakast.

Congratulations on a great TV show Eggert. How did the original idea come about to make Icelandic Tails?

Thanks, and I hope your audience will enjoy it. Well back in the 1990´s we did 30 episodes of Icelandic fishing programs. Now 20 years later I wanted to go back and see how things are after all that time. I found out that some things have changed. The passion of the fisherman is there, the rivers are basically the same but the skill of the anglers is even better, most of Icelandic rivers are now C&R and that makes a big difference, specially late in the season. And let me add, I just love filming Icelandic nature and great fisherman. 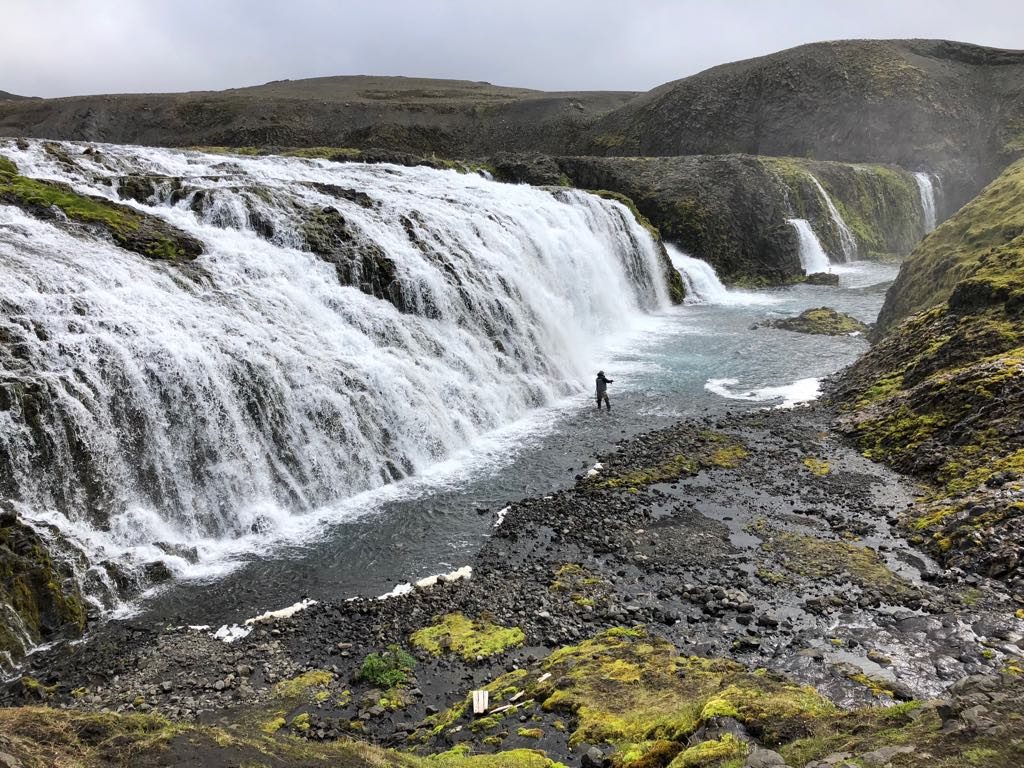 With salmon fishing on the best rivers in high demand in Iceland and a relatively short season, have you found it easy to gain access for filming?

It is easier now than back in the old days. Leaseholders and owners understand the commercial value of filming the river and the great fishing that some years produce. So we have a great understanding here in Iceland that seeing is believing. 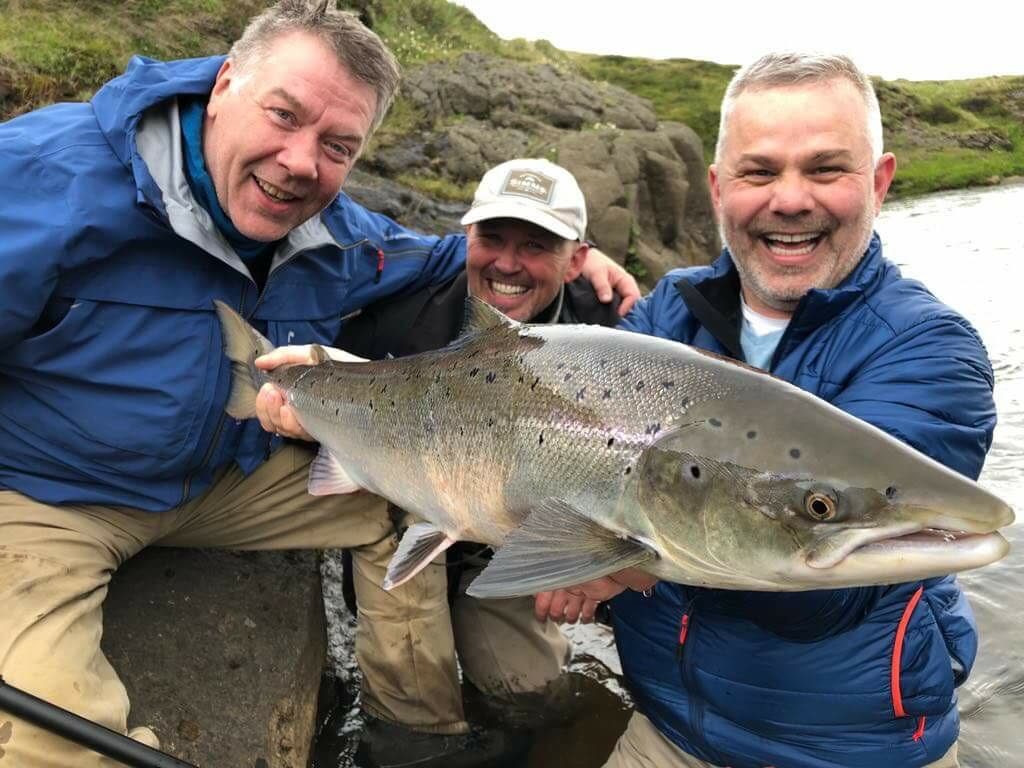 Eggert, Jonni and Rabbi on the river Miðfjarðará

You’re on the ground with leaseholders and anglers all season. In recent years, there’s been a lot of talk about salmon farms, catch and release, ranching salmon and other issues affecting wild salmon. What’s the feeling in Iceland about the future of wild salmon there at the moment?

I think the future is bright. There are few shadows to worry about and in particular the salmon farming in the Icelandic fjords. My personal opinion is that we need to stop the farming in sea and bring it ashore. It is dangerous in so many ways and hopefully politicians will as well see that danger. As for the C&R I have seen how positive effects it has. Rivers that were declining are on the rise again and producing good numbers each year. Midfjardara, from the first episode is a perfect example. It had been overfished at the end of the last century. Now after 11 years of catch and release the river is one of the best in Iceland. 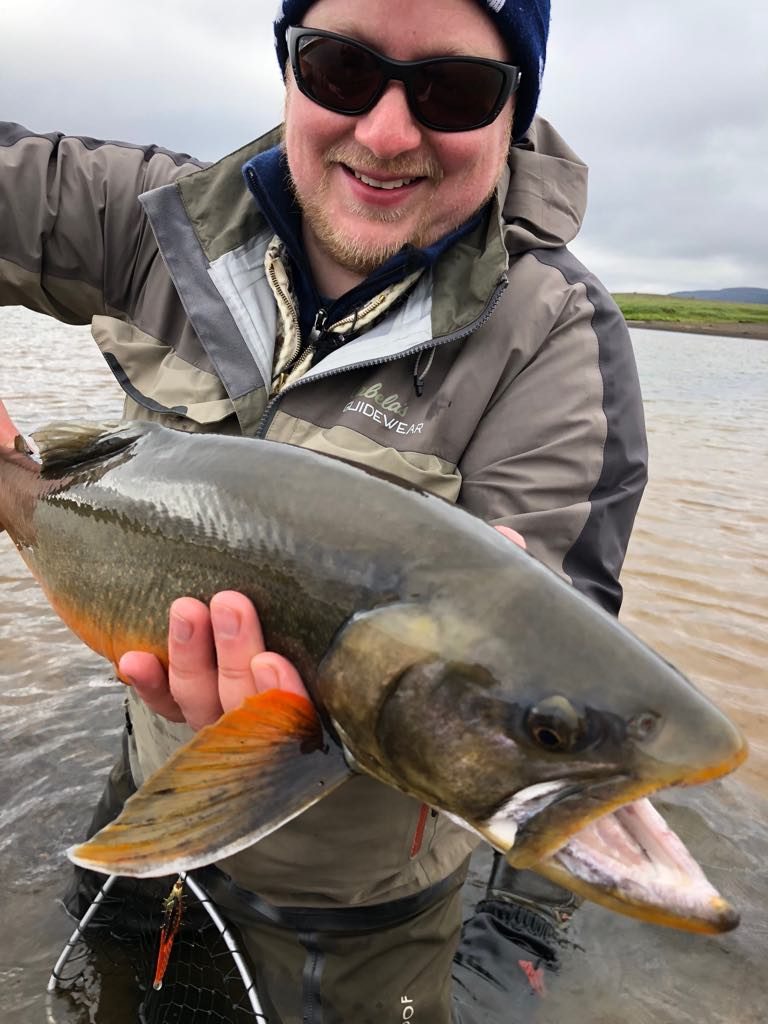 A beautiful Icelandic Char on a Streamer Pattern

In episode 3 we see you take a great trip fishing in a remote area for Arctic Char. With salmon being the star of the show in Iceland, do you think the char and brown trout fishing can be a bit underrated?

Absolutely. Sea trout, brown trout and Arctic Char are all great sport fishes and the rivers and lakes we have offer all kinds of adventures. Just take a look at Iceland’s biggest lake, Lake Thingvallavatn. The Ice Age brown trout are there as well as four types of arctic char. For a very decent price you can fish that lake for days and days. But I have noticed that more and more fisherman, young ones, are coming to Iceland for the trout. The salmon being very expensive, at least the top rivers, the trout season is longer and you can find nice permits for a low price. 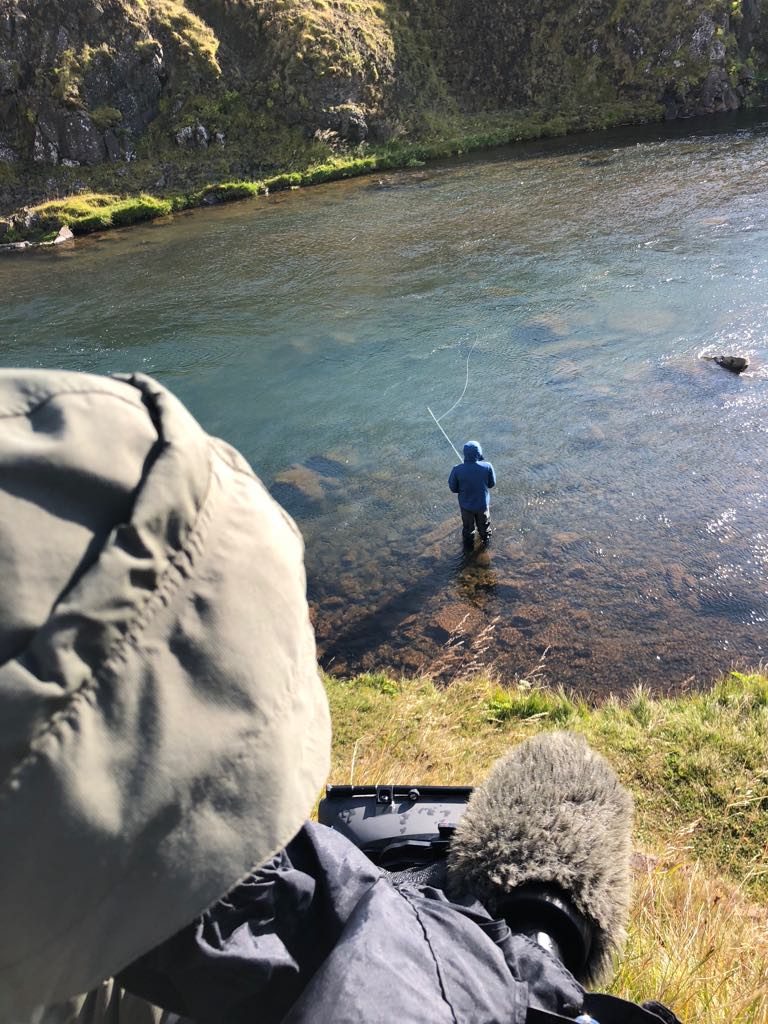 What’s the most memorable day or fish caught in Season one?

We had a lucky star over us and the fishing was great. I think the most exiting day was when we went to river Selá in the north east of Iceland. We did in the same trip fish with Jim Ratcliffe who owns a big part of that river and others as well. We filmed him fishing his private river that had not been fished the whole summer. That was something. As for the fish, there are two that stand out. The big salmon in the first episode that makes us climb and run and panic. The other one was in the last episode on the river Selá. The take was just under the drone and the fish was massive…… 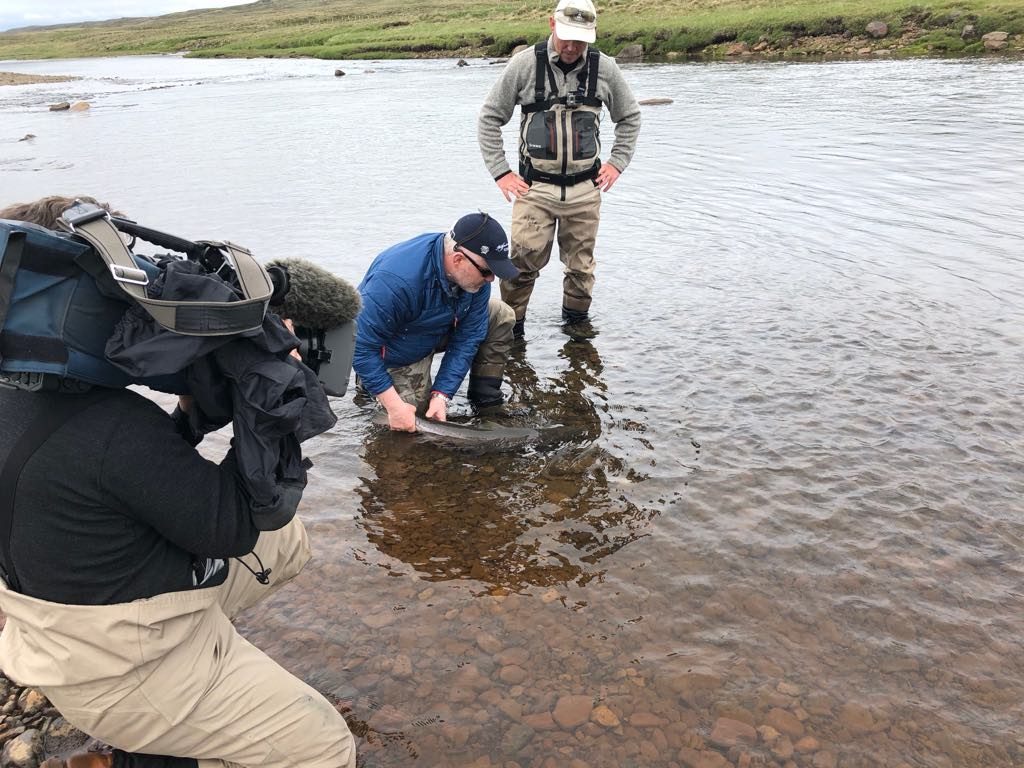 What can we look forward to in Season 2? New locations, new guests?

Season two has already been filmed. We have a completely new approach there. We filmed people from the UK fishing here in Iceland. We had some great company. To name a few we had the pleasure of fishing with Robson Green the actor, as well James Murray, actor. We took Charles Jardine and his son Alex Jardine  to the highlands fishing for predator char. Tiggy Pettifer fished few rivers with us, and Joanna Gibson and her daughter, Marina Gibson fished with us too. Finally we got to film Lilla Rawcliffe on the big Laxa. Lilla is 93 years old and she was fishing with her grandson and great grandson. Big Laxa did everything for us that we were expecting. As for locations – it was kind of a river running. We fished close to 20 rivers and lakes. 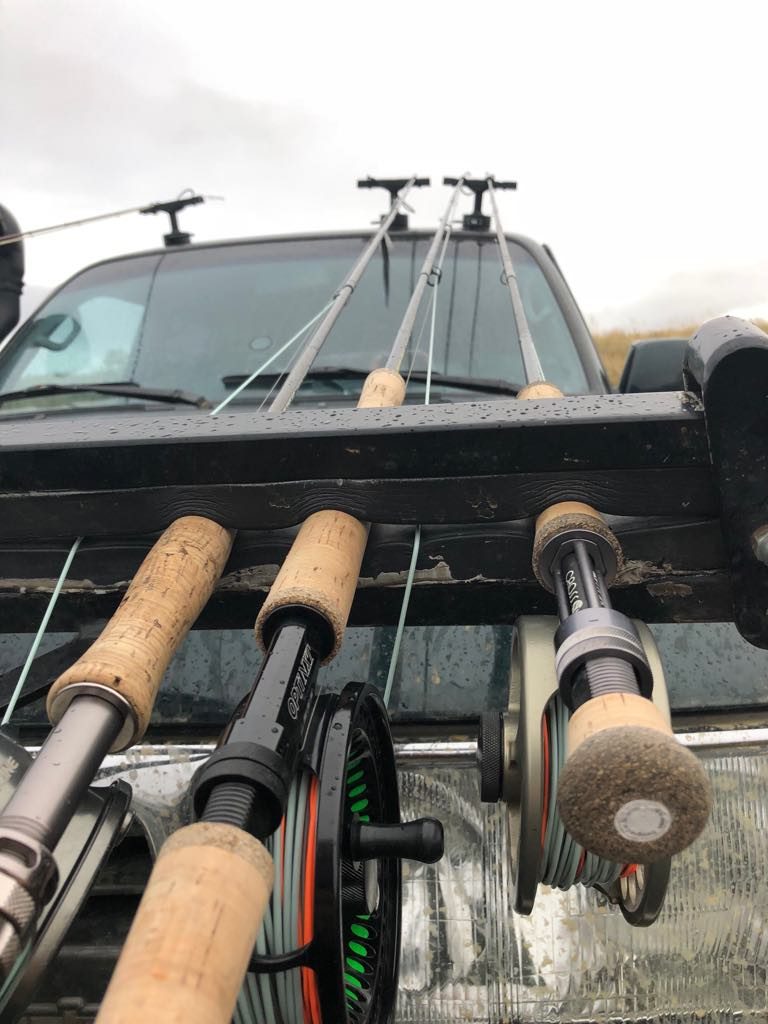 I see from your Facebook feed, that you do a fair bit of fly fishing yourself. What’s your favourite fly fishing trip to make in Iceland?

Well the possibilities are endless. If you want to go for brown trout, I would every day opt  for the upper part of big Laxá. For char I would love to go to river Lonsá or river Eyjafjardara. As for sea run I would go to river Eldvatn. But my favorite is river Vididalsa. You will not catch so many salmons there but I love to chase the big ones – don’t we all?

If anyone is planning a trip to Iceland or is looking for more advice on fishing there, Eggert is happy to help. Just email Eggert on eggert[at]franca.is