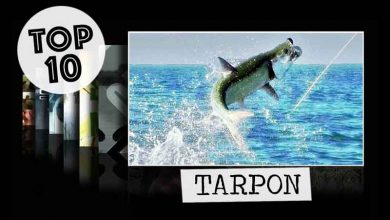 Is tarpon fishing the most exciting thing you can do with a rod and line?...well it certainly seems like there's a lot of evidence to suggest just that. These prehistoric beasts offer an incredible challenge to the saltwater sport angler. Not only are they difficut to tempt, then difficult to hook but their fighting prowess is second to none having an incredible burst of speed and amazing ability to jump. There are two distinct species, the Atlantic Tarpon (Megalops Atlanticus) and the Indo Pacific (Megalops Cyprinoides) and these fish can reach huge sizes with the rod caught record standing at a whopping 286 lb. In fact in 2017, an angler in the Gabon claimed to have caught one at 326lb although this has not been officially verified. Tarpon are born offshore but often move into lagoons and sometimes freshwater during the juvenile stage before moving back out as they reach adulthood. One unique and unusual feature of a tarpon is that it has a swim bladder that is used as respiratory organ and they are often spotted by anglers breaching the surface to 'breathe'. There are several main techniques for tarpon fishing including fishing with live baits such as mullet or crabs, using lures or fly fishing. This playlist contains some fantastic tarpon fishing films and TV shows. Enjoy! 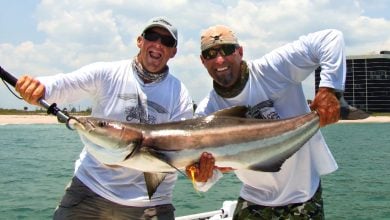 video
Stuart Florida
from Fly Nation – Watch Series 1
24:47
The Fly Nation team head to the Atlantic coast of Florida, where under the expert guidance of Capt John Meskauskas they target the Tarpon that gather in large shoals, feeding just offshore. There are plenty of other large species, Permit, Cobia and Crevalle Jack that also provide some lively entertainment. 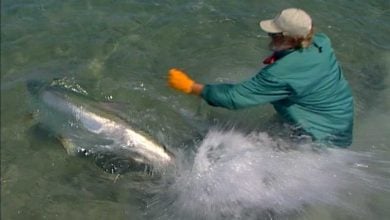 video
Totally Tarpon
from Hooked on Fishing Series 5
23:07
It’s an early start for Paul as he makes a dawn rendezvous with Florida fishing expert, George Wood. Before the sun gets too high in the afternoon, the team (including Richard Stanczyk) get some interest from the barracuda population. Returning later that evening, though, they head out to the area of the Keys known as ‘Channel Two’, and finally contact some Tarpon, although the powerful and wily fish ensure the subsequent battles border on the epic. 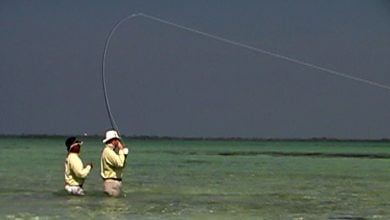 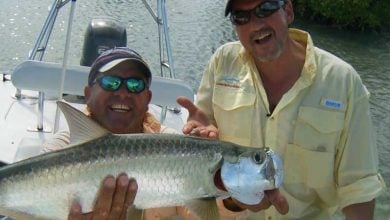 video
Cuba Part 2
from Sport Fishing on the Fly
23:00
Don is fly fishing in Jardines De La Reina in Cuba with Brian Chan and they're looking for a Grand Slam, a bonefish, tarpon and permit in one day. After a great morning on the bones, can Don finally land a permit, probably the trickiest of the three to catch. On the bench, Don ties up one of his favourite tarpon patterns. 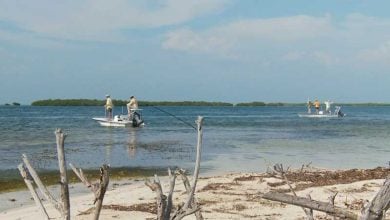 video
Cuba
(1)
from Sport Fishing on the Fly
23:00
Don is on his annual pilgrimage to Cuba for some saltwater fly fishing. Down in Jardines De La Reina, Don's main target species are tarpon, bonefish and the elusive permit. After some fun with the bonefish in the mangroves, Don heads out to the flats as the tide is going on and finds a nice school of tarpon and some permit. 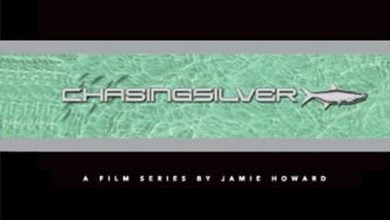 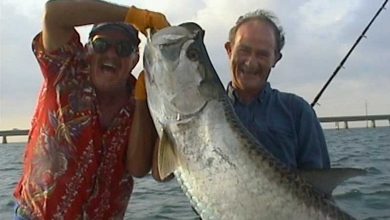 video
Seven Mile Tarpon
from Hooked on Fishing Series 1
23:56
Paul is in Marathon, the largest of the Florida Keys and meets up with legendary skipper Donnie Braswell who plans to put Paul on some Tarpon. They set off early to Seven Mile Bridge, which Donnie is sure will hold some big fish. Paul be using live Mullet as bait and Donnie gives Paul plenty of advice before he starts, especially as there are lots of obstacles around with the bridge pylons. There's plenty of fish about, rolling between the bridges, and a couple take Paul's bait but hooking them is tricky and so they decide to move a little. The move pays dividends and Paul hooks into a nice fish and enjoys a strong battle before the Tarpon throws the hook near the end. The next fish is an altogether different proposition which Donnie estimates at 125lb and has to get on the engine quickly to chase it down. A long spectacular fight ensues before the Silver King makes one huge jump near the boat and breaks Paul's leader. As evening comes around, Paul gets into another one but can he land this one? 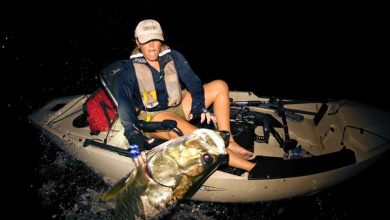 video
Tarpon On The Edge
from Hobie Outdoor Adventures
21:34
Morgan Promnitz and the Hobie Team visit a number of locations around Florida and catch a spectacular variety of fish from their kayaks. But the highlight has to be a night time fishing session for Tarpon at Fort Meyers. 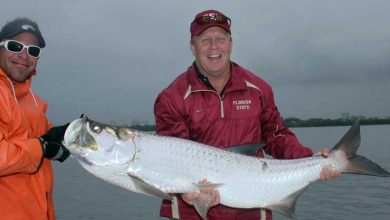 video
Puerto Rica Tarpon with Danny McManus
from Fins & Skins – Series 1
23:15
Henry is hosting fellow Canadian Football League star, Danny Mcmanus, widely regarded as one of the best ever Quarterbacks in the CFL, and in this episode they'll be targetting the mighty Tarpon in Puerto Rica. They'll take it in turns to fish and Tarpon under 50lb will count for  5 points, over 50lbs and its 10. The biggest fish will get an extra 5 points before the points are tallied and converted to strokes for the golf match. Danny gets the ball rolling and a strong Tarpon gives him a nice workout and an early lead in the match. Karim Chaar, the skipper shows us some handy tips for the best way to attach live baits to your hook when targetting Tarpon. As the rain starts, Danny gets into another hard fighting Tarpon and lands it after another brutal fight. Henry then hooks into a big Tarpon which makes some spectacular leaps out of the water. A long fight ensues before Henry lands his 5th biggest ever Tarpon....what a fish! We take a look at Danny's career before the scores are tallied and the pair head to the golf course. Henry's ahead but Danny is a fine golf player so the match is definitely up for grabs. To watch just login or join 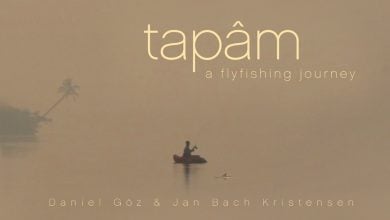 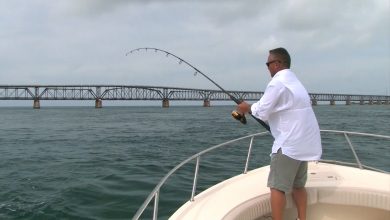 video
Tarpon in the Bay of Honda
from Reelin in the Keys
22:41
This series takes a documentary style look at the Charter Captains who make their living taking clients fishing in the "sport fishing capital of the world" - the Florida Keys. We join a different boat in each episode, and over the series picks up some top pro tips, and hear's some tall tales along the way. This episode sees us hook up with Captain Chris Johnson and the crew of Sea Squared Charters for a spot of fishing under the Bahia Honda bridge, a known Tarpon hotspot. 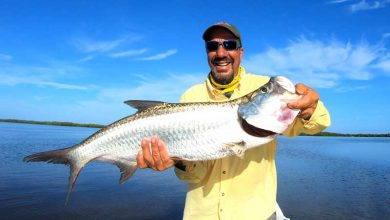 video
Isla Arena – Island of Tarpon
from Yucatan Anglers TV – Series 2
20:48
Found on the Gulf Coast of Mexico, The Isla Arena is also known as the "Island of Tarpon" and for a pretty good reason. It is one of the best locations in the world to find these magnificent silver monsters. Host Randy Bowser enjoys a two day trip to this amazing location, gently travelling the channels through the mangroves and out into the open lagoon. Guided on to a huge pod of Tarpon, Randy enjoys a personal record number of hook ups. He doesn't net them all but as he says "The tug is the drug". To watch Isla Arena - Island of Tarpon now, just login or register 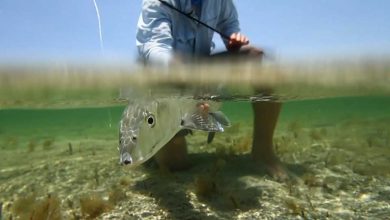