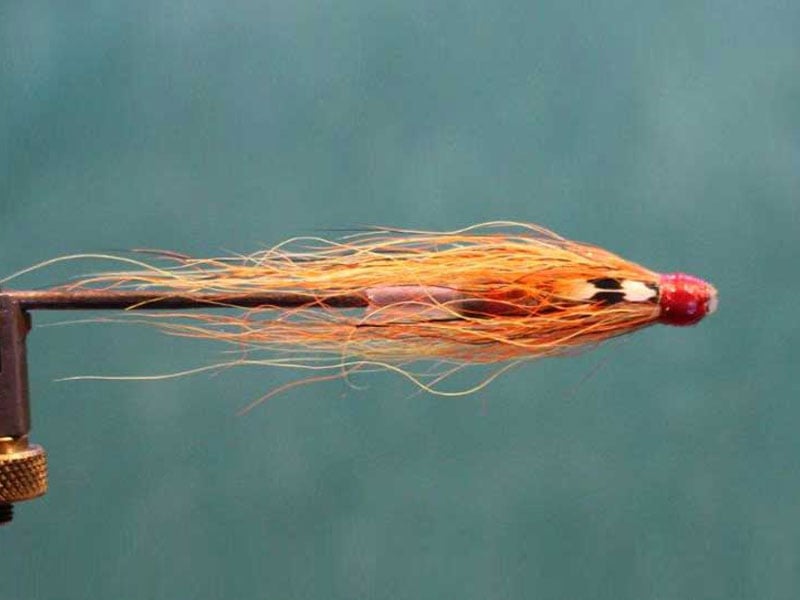 With fishing opening up all over the UK, I thought it would be a good idea to have a look at some of the salmon flies that I like to use during a typical season on the Queen of rivers, the River Tweed. This most famous of all salmon rivers, borders England and Scotland flowing from source to sea for 98 miles, and offers fantastic fly water throughout its length.  I have personally been fishing the Tweed for 35 years now and a lot has changed over that time.

Most notably, has been the change in the running pattern of the fish, together with a substantial decline in their overall numbers. A further additional factor is the change in climate which has produced more flooding events in early and late season and Summer river levels often too low for comfort over long periods. Tweed supporters like myself have had to adapt to a different scenario when organising our trips, and it has become necessary to be very versatile when planning your approach to a successful session.

In terms of changes in tackle, our rods have become lighter, double taper fly-lines committed to history, and salmon flies have evolved dramatically with the increasing availability of good quality synthetics, furs and feathers.

Over the years I have acquired literally hundreds of salmon flies, most of which were aimed at the capture of fresh Autumn Salmon in medium to high water. These are now fit for only one or two days in the year although they still remain personal favourites for nostalgic reminders of some great days with old friends. My Spring fly collection has remained fairly consistent over the years whilst the flies I now use in Summer conditions bear no resemblance to anything  I used over 10 or so years ago. This means that my collection has become a bit of a “hotch-potch “ with so much choice that it would have been  easy to be overwhelmed by the options on show. So, I made the decision a season or so ago to limit myself to six patterns which, in various sizes and profiles, could see me successfully through a Tweed season and so far I don’t have any regrets. The patterns I chose have proven to give me enough options to enable me to fish with confidence over the whole season. 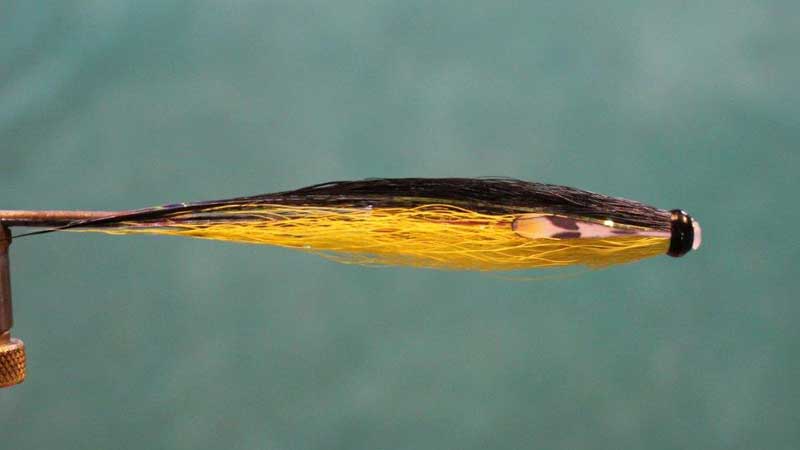 Just about every angler or guide I know would start with a fly of this colour at the beginning of the season because this combination works supremely well in various sizes and guises.

Whether in traditional pattern or long-wing “monkey“ style on tube flies, this will work.

In low Spring water the “Drainer “ style of highly mobile throat and wing can make for aggressive takes from fresh fish. 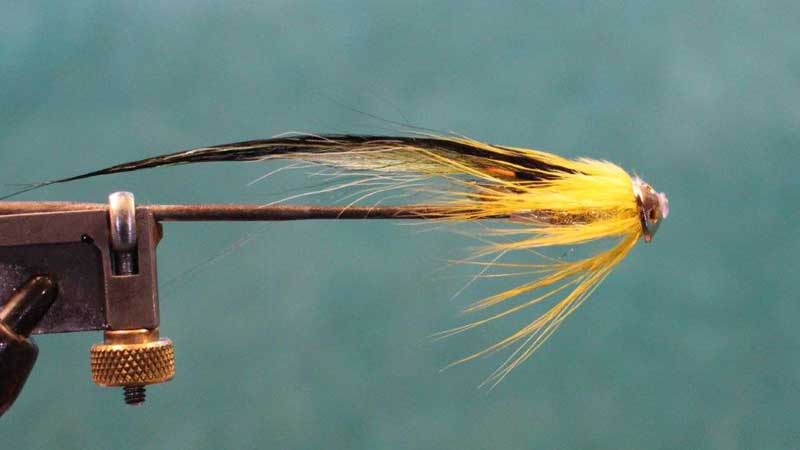 Yellow and Black with Drainer

The actual colour yellow used is important. It is not an accident that all early flowers are predominantly a similar yellow in colour; Daffodil. Dandelion, Celandine. The material used should replicate the rich yellow of these flowers as near as possible.

In very cold water I use a silver-bodied version moving to gold as the water warms. 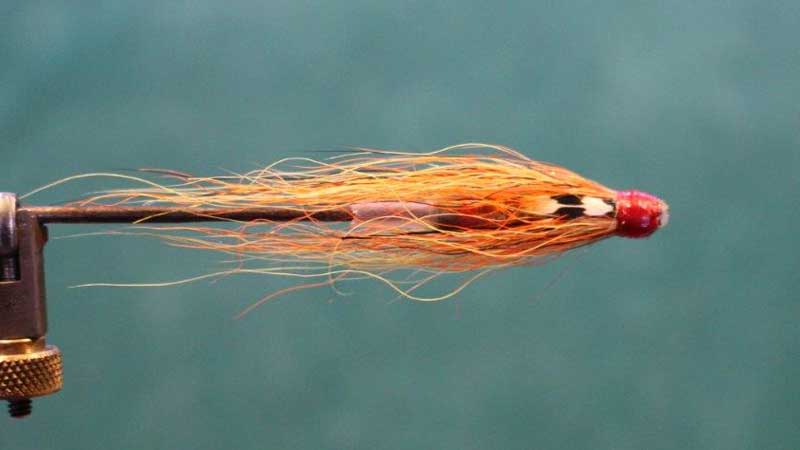 Another tried and tested pattern with a proven track-record. The mixture of yellow, orange and black hair means that this fly can be tied in varying shades with darker variations to the one shown. I take a lot of trouble to get just the shade I prefer which tends slightly more to the orange spectrum. I have tried mixtures of Arctic Runner and Arctic Fox when tying with little success as the colours blend too readily. The stiffer structure of Bucktail accentuates the colour differences within the profile and I think this adds to the attraction. It is important not to overdress this fly and the gold body must be noticeable when the fly is in the water. A change in head colour from red to black has a significant effect on how the overall fly looks.

A go-to pattern in coloured water. The Drainer style is once again very good in clear low water.

This is a fly for the whole season and is probably the most versatile pattern of them all. 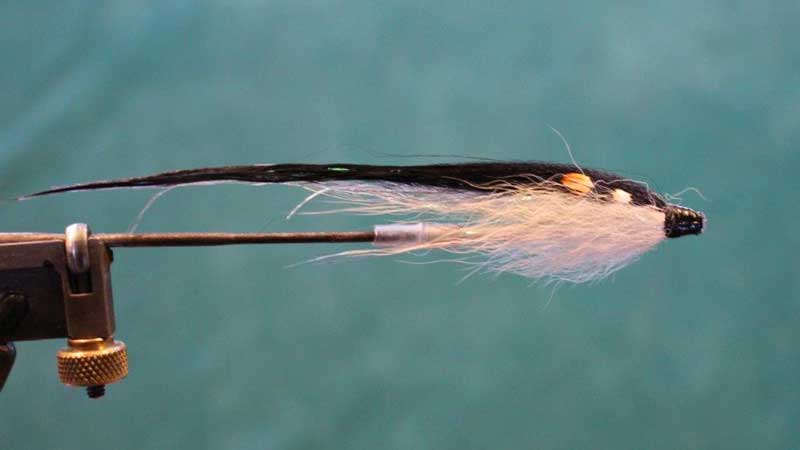 When the fish react to this fly fished stripped fast on a full floater, I don’t think there is a more exciting way of fishing that has been invented!. The black and white version seems to work well on the Tweed for both Salmon and Sea Trout.

I tie these with the tube at least half the length of the wing. It can be a problem with shorter tubes that fish are lightly hooked and are easily lost. This can happen many times over and can be extremely frustrating. Whilst it could be argued that tying this way detracts from the movement of the fly, this effect is minimal. The fish come across the fly more often than not and a centrally placed hook is more efficient in my view. The peacock herl used on the uppermost wing of the fly really adds to the profile.

The more simple Icelandic tying with a hint of yellow  is equally effective when the water is low and clear. 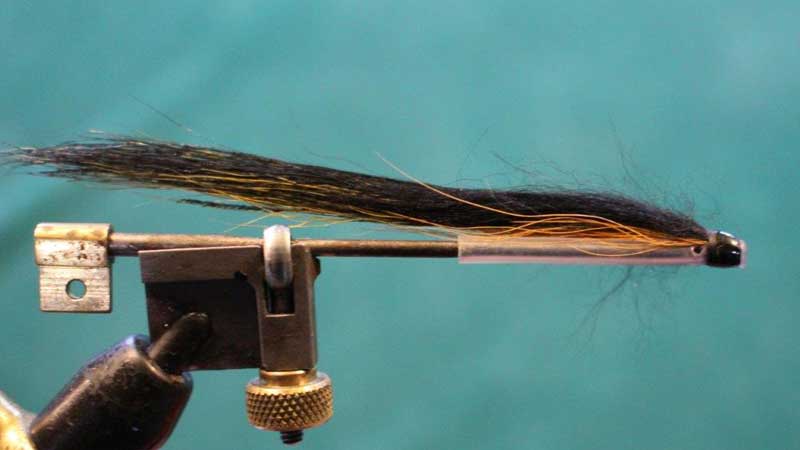 These flies can be fished square or with various speeds of stripping, It is important to read the water and create a good arc in the passage of the fly.

Sometimes the fish can chase the Sunray several times without taking. Make a mental note of where the fish is and come back 15 minutes later with a more conventional pattern.

You will be surprised at how often this will produce. 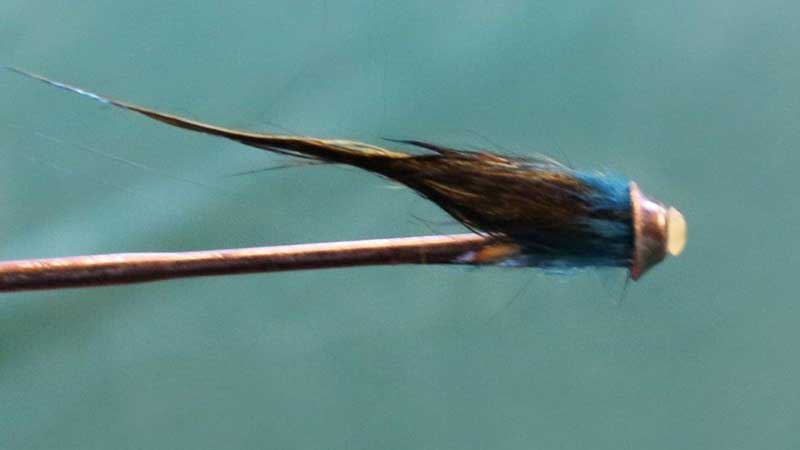 The well known Swedish Angler, Mikael Frodin developed this fly and in a Micro version it is a real low-water killer. The subtle shading of blue black and yellow together with the complete mobility of the bodyless fly seems irresistible to Grilse when fished on an intermediate sink tip. This fly needs a small double or treble hook size 14 or similar and should be fished with an 8 weight or lighter rod. A common mistake on Tweed is the use of 10 or 11 weight rods throughout the season and the consistent use of casts, like the “ Snap T “ which cause more disturbance than necessary in low-water conditions. This really does cost rods fish and is probably the most common error I see in a Tweed Summer. 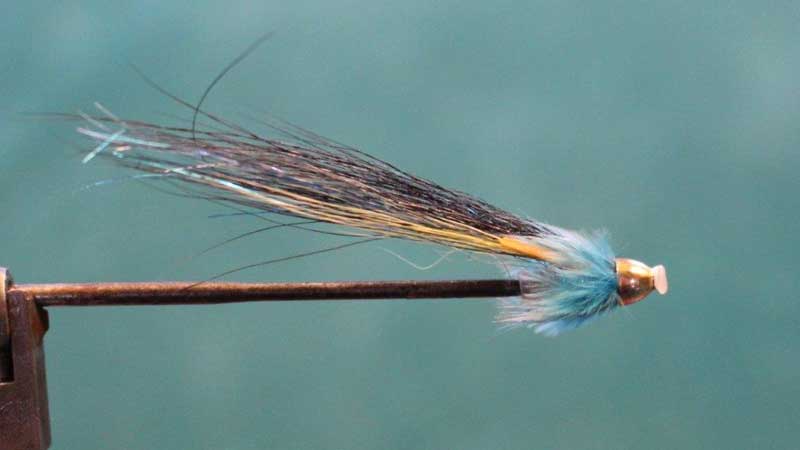 The larger version on which the colour differentials are more marked, comes into its own in medium water or stripped in the Icelandic “inch by inch” style which accentuates the movement in the tail.

I would recommend that both flies are fished on the longest tapered leader than you can effectively manage.

This fly also works well on the Aberdeenshire Dee where Mikael first developed and named it. 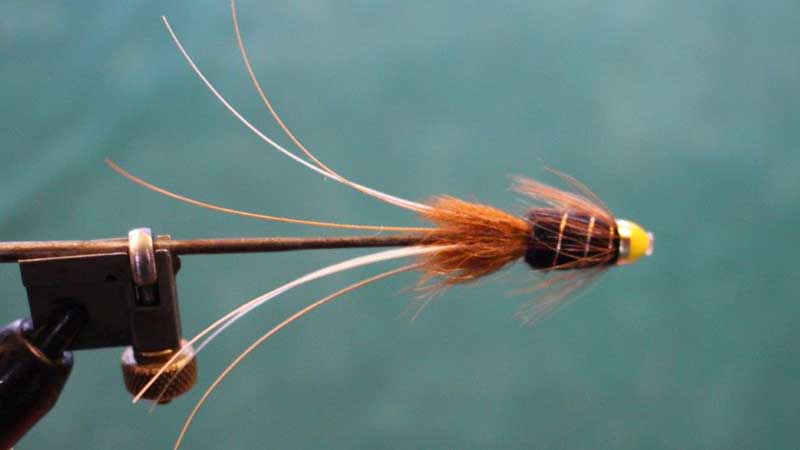 The popularity of Francis type flies has gained momentum over recent years with many different variations in body type and colour but the Black ( probably should be called Brown!) Francis is my favourite. The likelihood these days is that Autumn Fish will have been in the river for a few weeks and will be more difficult to catch. The “ feelers “ on this Fly makes the impact completely different from anything else the fish may have seen. Tied on a Treble Hook and fished midway in the water column this fly can switch the fish on even when the Beat has been fished hard with more conventional flies. Short, sharp pulls  on the line whilst it travels across the pool replicate the swimming action of the Shrimp- like creatures that the fly imitates. 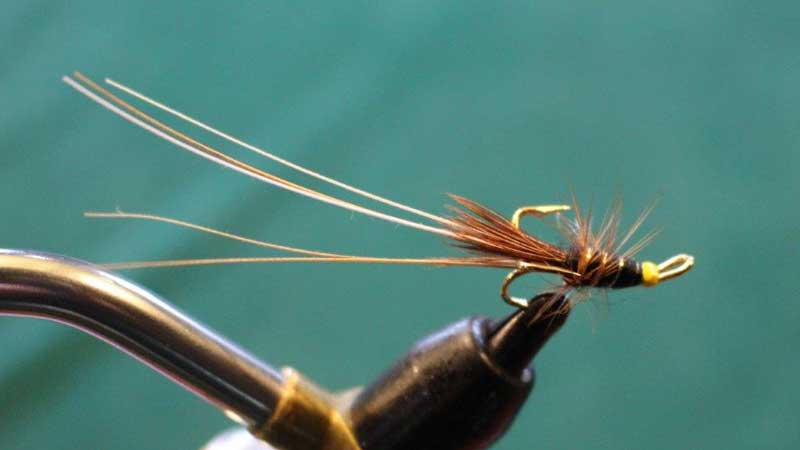 The much larger version I use on hard fished water when absolutely nothing else works on the basis of a  “Shock and Awe “ tactic. Fished  as deep as possible with a square cast, almost nymph-like, l let the fly travel and then retrieve with long, slow, pulls. The effect can be electric! with “smash” takes from  aggressive fish. This fly should not be fished through a pool in a conventional way with a pace or two between casts. I have had much more success fishing a small area quickly and then moving 25 metres or so to another area and repeating the process. This way, the “shock” tactic retains its impact. 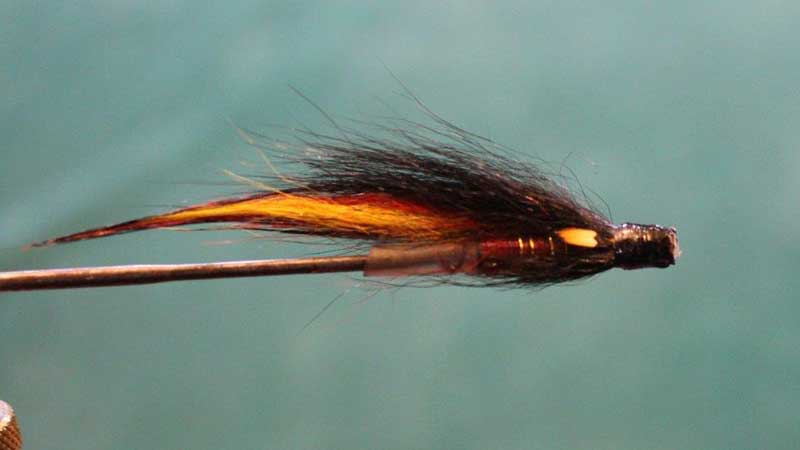 Anybody who has fished the Tweed for a number of years will recognise the Comet fly which, for many Autumn Fishers was the most popular choice by some considerable margin. And the truth is that the combination of Black over Red, over Yellow or Light Orange with a Black and Red body still is an extremely effective combination later on in the year. I tie the fly in a more modern way with a more defined wing but the essence is the same. Fished slow and deep this fly still retains great interest from fish that have been around the block and are becoming aggressive.

A further variation that seems to work even better in clear water is tied with a Black wing and Red underwing with the Yellow tied as  small “interest” apron underneath. I use Black tubing as a hook keep on this fly to make sure that the yellow stands out. 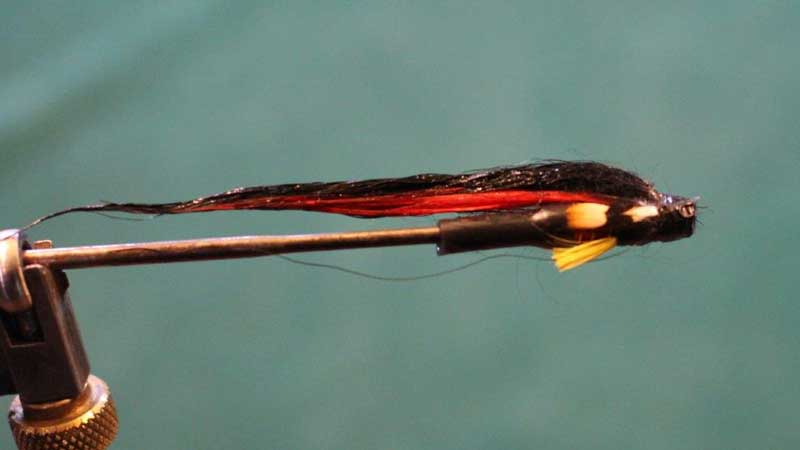 Referring to the past again, this fly is reminiscent in colour and profile of the Tadpole fly which became popular in the 1990’s and was a pioneer of the longer-tailed more mobile flies that are favoured today.

Both of these patterns refer well to tubes of different sizes and tied in various lengths would give the Angler lots of options to cope with the variations of water levels you are likely to experience at this time of year.

I’m confident that the six patterns I’ve mentioned would give me all the all the options I would need for a successful Tweed season, BUT being a true Salmon Angler, I would also have sleepless nights wondering if I had got it right !!

There has to be one “ for her Majesty “ so to speak and that would be :

Junction Ghillie Gavin Brown’s JUNCTION SHRIMP. This white and orange fly is a masterpiece for coloured water any time of year !

I wouldn’t be without one. 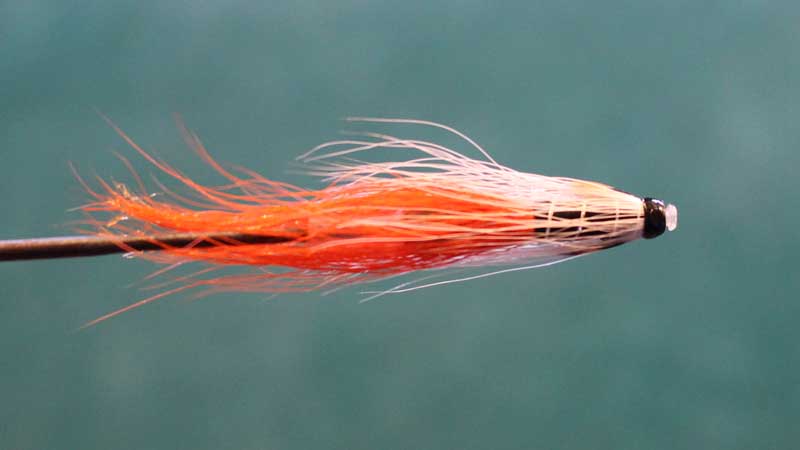 This article was written by owner and founder of Fishing TV, Rae Borras who has extensive experience fly fishing for Atlantic Salmon, in Scotland, Norway, Iceland and Russia. Rae presents the Game Fisher’s Diary which features some top beats on Scottish salmon rivers.