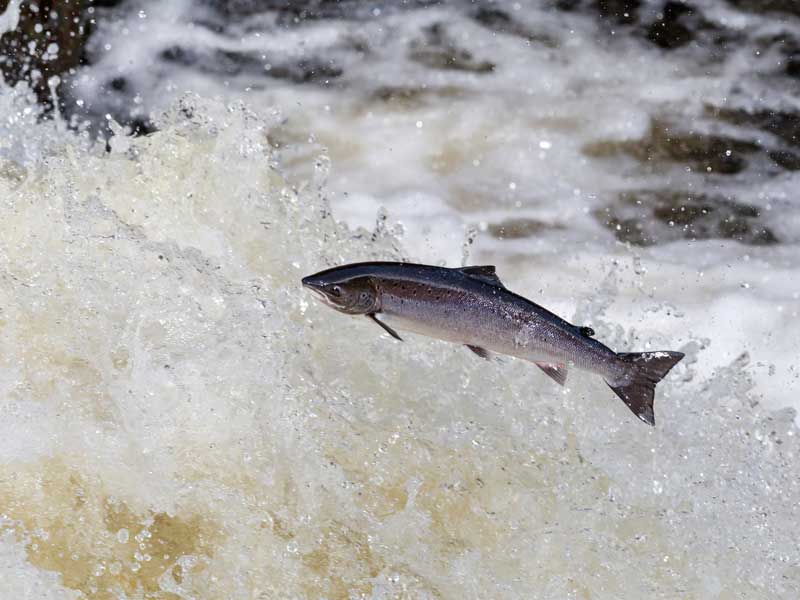 Look around you people… we live in worrying times just now and it seems no matter what we do with restrictions and preventive measures, nature is suffering big time, and especially our wild salmon! The world is losing plant and animal species at an alarming rate of knots and now more than ever it seems that fish are having the hardest time of them all. As anglers we need to be sure that we are doing our part in order to help with fish stocks for future generations. Just think of how often you hear the older anglers talk of the vast numbers of fish that could be found in our seas, rivers and lakes. It seems that in the olden days our waterways were stuffed to the gunnels with fish and in many ways, compared to now, they were!
Personally, I grew up on the banks of the River Tweed, one of the most famous salmon rivers in the world, I can honestly say hand on heart, the salmon runs that I witnessed as a teenager were nothing short of staggering! Below the salmon ladders ( fish pass) the water was so thick with salmon you could more or less walk across their backs to the other side of the river!

Scientists and conservationists the world over are trying to figure out why wild salmon are in such decline and films like Atlantic Salmon Lost at Sea are showing us some new ideas but unfortunately there just isn’t one simple solution to all this. So, just what can we individually do to help save wild salmon this stunning migratory species, which bring so much joy to so many anglers and indeed pumps money into otherwise fragile economies!

This sounds drastic, but is it? We see it all the time with trout anglers, granted there’s more trout and they may not be as tasty as a salmon, but it’s pretty much catch and release all the way!
Anglers use excuses sometime, you’ll hear them often say that they had to kill a fish for this reason or that reason, but let me say this, a salmon with an injury can still attempt to spawn! However, one that’s been whacked over the head, cleaned and gutted, then oven baked before being served with some boiled potatoes is going to struggle?

Get it right!
There’s a lot of good that comes out of catch and release fishing, done right it’s quick and easy, the fish swimming off strongly to head on up-river and ‘do its thing’!
Some tips on getting it right:
• Make sure your gear is strong enough to cope, powerful tippet is a must.
• Use single hooks, preferably barbless ones
• Tail the fish, using a tailing glove, it’s better than using a net
• Don’t take the fish up the bank, keep it in the water
• If you’re taking photos, make sure the camera is ready to go, make sure that when lifting the fish it’s well supported and again, over the water.
• Ensure it gets time to recover so that it can swim away strongly.

We see more and more predators on our rivers than we have for many generations and this is mostly fish-eating birds.
These birds annihilate young fish, the parr and smolts, and it’s this decimation of numbers early on that has a knock-on effect. Please report these predators, this can be to the river keepers, ghillies or guides who will no doubt have some form of licence to help control these pests.

There are many good people trying to do good things in order to keep our fishing house in order. These organisations need your help!
They are easy to find online and by helping them, whether that be financially – money always helps – or even just by following them on social media, (Twitter, Facebook) to increase their numbers and raise their profile within the community, is a bonus!

The massive impact that fish farms are having on our wild fish stocks is something that needs highlighting! The brilliant film, Salmon Confidential showed us what was going wrong a few years ago but it doesn’t seem like we’re moving fast enough to halt their progress. Simply, don’t support this dirty aquaculture, it’s easy enough to do, don’t buy any farmed salmon, simple. These farms are creating an environment that parasites thrive in.
Thousands of fish in netted off areas all in very close proximity to each other are a haven for sea lice and other aquatic parasites. These increased numbers of parasites means far more of them are present in the water, the exact same water that the wild fish have to swim to get to their migratory streams and the smolts have to swim past on their wway out to sea! Talk about running the gauntlet!

A little caveat to the above but one that is most definitely relevant I feel, is to tell your friends just how bad these things are for our wild fish stocks! If this was happening in a chicken farm, the public would be up in arms but its hidden away underwater so we need to tell people, especially our non fishing friends, the truth. Highlight to them
the fact these fish, farmed ones are freaks, a Frankenstein of fish that have been genetically bred and fed a whole host of various chemicals from steroids to food dyes in order to get them to your table and looking ‘edible’!

All of us have a voice but at times as an individual it can be hard to be heard so get in touch with those that can help. Local authorities, groups and even your MP’s and political representatives can be contacted in order for you to voice your concerns. It seems that we see pollution incident on our rivers more and more, these must be reported straight away. There may be local projects in your area that can affect these migratory fish’s journey up river, again, make a point of telling someone in authority your concerns. The more people that speak up the better!

What is it with man and dams they are everywhere and there seems to be more being created all the time! These things are the single biggest hurdle for our salmon! It’s terrible in the US, they seem to be everywhere! Put a stop to it, object to these things being built, or at the very petition for a sensible fish pass. I mean come on, a fish canon, what is that all about!? Dams massively inhibit salmon getting up to their spawning grounds, it’s a fact!

As an individual you can help by joining up with work parties, this is usually through angling clubs or local authority groups.
The riverbanks get cluttered up with all of our litter, this litter builds up in place and creates silt beds, not good! Salmon need good, clean gravel in order to spawn, by helping clear all the crap from the river you can safely say that you are doing your bit to save wild salmon.

10. Look after the little ones

As salmon anglers we need to also make other anglers aware of just how fragile these migratory fish are. The juveniles, parr and smolt that live in the river need to be cared for too and given some respect.
People often see these as a nuisance and as such deal with them a little too aggressively. I’ve seen trout and grayling anglers, swing these in and shake these fragile little fish from their hooks which is not good this as this can cause an injury to the mouth can stop them feeding properly.
Take care with these little fish, wet your hands before touching them, so as not to take any protective slime from their body. Unhook them carefully and ensure they get put back in the water with the minimum of fuss!

Salmon are a very valuable resource, and through angling they bring in lots of money to local economies in  remote areas  but they’re very vulnerable right now so let’s make sure that they are there for our kids to enjoy too!

This article was penned by Steve Cullen who is an experienced fly angler and journalist. You can contact Steve via his website here