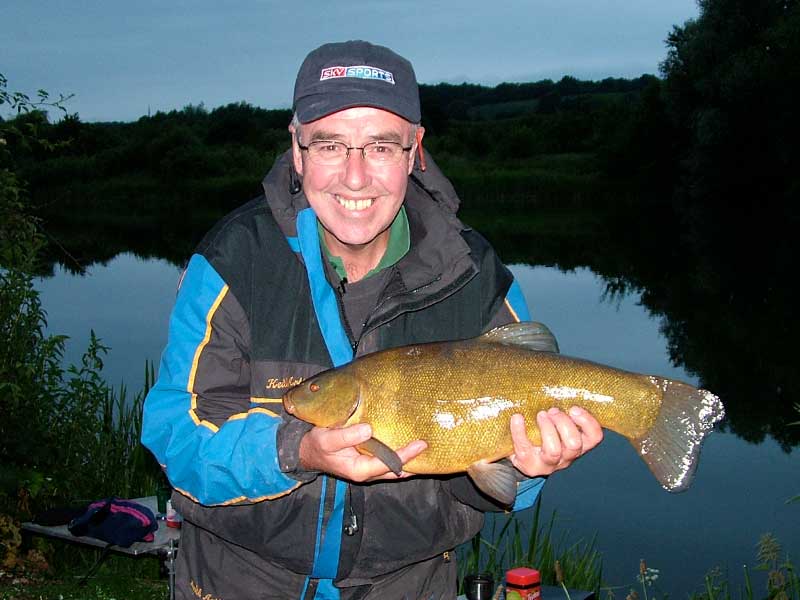 Spring is in the air and for me, that means one thing, its time to start thinking about Tench fishing again. In the ‘old days’ of a total close season, when the coarse fishing gear went away for three months from mid-March to mid-June to be replaced by either sea tackle, a fly outfit or, god forbid, decorating equipment, us anglers went directly from winter to summer fishing.

Our prime target for the first day, the Glorious 16th (of June), or whenever we could escape work, was invariably Tench. What we didn’t realise then was this was actually a bit late and even as the season drew to a close, ‘surprise’ tench would appear in the angling press. Prime time for ‘the doctor fish’ as old-time anglers christened tench starts in late March and the best is well passed when they start to spawn in mid-late July.

Because the weather and water conditions can change so dramatically between the ‘Ides of March’ and June so must the way we approach a tench session.

I have never found Tench to be night feeders. To be honest I wouldn’t as I don’t like to fish at night but there are few photos of Old Red-Eye in darkness. Tench are fish of the early morn and some of the best tench catches I’ve made have seen me home in time for breakfast.

So, get out there and enjoy some Spring Time Tench Fishing, and here’s my top 7 tips to give you a head start…

1: Use the Right Tackle

I have two main rod and reel set-ups for tench. For legering I use a medium feeder rod, designed for reel lines between 6lb and 8lb with a fixed-spool reel in the 4000 size category, loaded with 6-8b monofilament. For float fishing I have a dedicated ‘Tench and Specimen Float’ rod but a decent pellet waggler rod designed for 5-6lb line and a good 3500 size reel. Make sure your reels have a good drag. Of course for the float rig you could always use a centrepin, should you own one.

Tench really like soft bottom but not heavy black silt. One of the best places to find them is at the bottom of a shelf, where a shallow area drops into deeper water. When legering, if you have one of the new sonar devices have a few casts around trying to find such an area. If not, use the tried and trusted bomb and countdown method. Cast around and count as the bomb falls through the water. If you can find a shelf, fish the bottom of it. Check out this video which will help you find the depth.

In early in Spring tench are more likely to be beyond standard float fishing range. Try using a block-end/maggot feeder loaded with live maggots – I prefer a mix of red and white – with a bunch of dead red maggots or a mix of live and artificial maggots on a small maggot clip fished on a hair rig. I have found betaine powder or Betalin liquid to be an excellent additive for tench and add a small amount to my maggots in the bait box.

As the weather improves and water warms tench will move closer…MUCH closer. In fact at first light tench will often forage at the bottom of the near marginal shelf and careful feeding can keep them there for a while. This is float fishing time and I like to use either a pole float set-up, fished with a dust shot (no8) on the bottom to hold the bait still right under my rod tip if depth allows. If not, there isn’t much to beat the old fashioned lift method. Use a peacock quill waggler, 2AAA size is fine, locked with rubber float stops. Use a 5BB shot – which will sink the float out of sight – but plumb up using the shot as a plummet then set the float 75cm to 1m OVER depth. Throw in some loose feed such as casters and red maggots with a few grains of corn. Cast your bait into the baited area, allow the float to settle, then tighten the line slowly until the float ‘cocks’ under tension. A bite will either pull the float under or it will rise in the water and lay flat…hence ‘lift method’.

Although mornings…early morning especially…are prime time especially for float fishing for tench, I believe they swim around areas of lakes most of the day before retiring to a sanctuary overnight. Once the early morning feed has finished I have found they return, often more than once during the day. I have caught tench from gin-clear water in when the sun has been very high in the sky, still fishing very close in, when you’d think all hope has gone. When bites cease, put a couple of balls of soft groundbait in…I prefer a sweet mix and will add red food colour too containing some casters or sweetcorn. I tend to avoid pellets as they can attract bream and carp and if you’re fishing for tench they should be your target.

6: Prepare for a battle

Tench are hard, sometimes dirty fighters. They know where the snags are and will seek refuge in them. Apply sidestrain to keep the fish away from them and set your drag so the fish have to pull hard to gain line. Makes, distinguished by their scooped pelvic fins, are especially tough fish to land. If you net a fish that’s lack of stature belies it’s fighting qualities…it’s probably a male.

Although tench are primarily found in classic stillwaters, many commercial fisheries hold good stocks and gravel pits can hold some excellent tench. Surprisingly canals can also be great tench venues with Kent’s Royal Military, the Chichester Canal, Bridgewater Canal in the West Country and the Grand Western Canal in Devon are all superb tench waters. There are plenty in the Grand Union too but finding them is difficult and, oddly, more seem to be caught through winter than the usual peak time.

This article was written by Keith Arthur, a respected angling journalist and former presenter of Sky Sports, Tight Lines. He writes for the Angling Times and is currently filming a new coarse fishing show for Fishing TV about Britain’s favourite fish which will air in Summer 2020.