World Fishing Day is coming – a global day to celebrate all things fishy through a network of community fishing events and a groundbreaking 24-hour live fishing broadcast from around the world. But how did we come up with this crazy idea? George Browne explains the logic behind the madness.

On the 8th of May 2017 I was casually scrolling through my Facebook feed (I was doing that a lot at the time as my girlfriend was studying for her accountancy exams and I was required to be quiet in the house so that she could concentrate) when I came across something that would have a more profound effect on my working life than I could possibly imagine. It was this video:

I’d been vaguely aware of the SlowTV movement in Norway for some time, but when I’d first heard of it I hadn’t been working for FishingTV. Given some of the incredulous reactions I get when I tell people about my job, I now looked at with new eyes. I was wondering if we at FishingTV could take something away from the SlowTV movement and apply it to what we were doing. And then the TED talk mentioned the salmon fishing project: 18 hours of live salmon fishing… it was a real lightbulb moment, but I didn’t yet know what the idea was. I just knew we had to take inspiration from it.

I immediately sent the link to my colleague Ed. “Yeah very cool. We could film me for 3 years trying to catch a salmon,” was his sardonic reply. But the over the next few weeks we returned to the subject over and over again – it just kept nagging at us. The more we talked about it, the less ridiculous it all seemed.

We’d been talking about the rise of live-streaming in social media for a few months by then, and we had also been talking about doing something big to really make FishingTV a household name in angling circles, and hopefully beyond. Slowly an idea started to take shape, and that idea was a 24-hour live fishing broadcast from around the world. It was a crazy plan, but, as they say in the movies: “it might just work.”

But it was clear to us that such a show would be an unmissable opportunity to address some of the issues that are close to the hearts of anglers the world over, like participation numbers and conservation; and to tell some of the stories that we feel are relatively untold even in the angling community – the health and wellbeing benefits of fishing and the importance of fishing to the economies of remote communities around the world. Another thing that was clear was that a stand-alone broadcast would be perverse – this was a chance to encourage people the world over to get out fishing.

The idea was evolving into something that looked pretty exciting. But we are a small team – we were going to need some help in pulling it all together. So we started contacting all the non-profits and charities that we have relationships with, as well as production companies and well-known and respected anglers.

And so, several months later, we had identified some amazing locations, signed up a stellar list of ambassadors and some of the biggest and most influential angling organisations in the world.

Fishbrain came on board as the official App Partner towards the end of 2017, which was a major boost – they’re probably the biggest single network for anglers in the world, and their reach within the industry and the wider angling community has been enormously helpful in bringing everything together and moving things forward, and filling in some the areas of the map where we didn’t have contacts.

We’re now a little over 2 months from the big day (73 days, to be exact) and there’s still a lot of organisation to be done, but each day that passes sees another brick fall into place, as a location shoot is finalised, or another presenter is signed up. 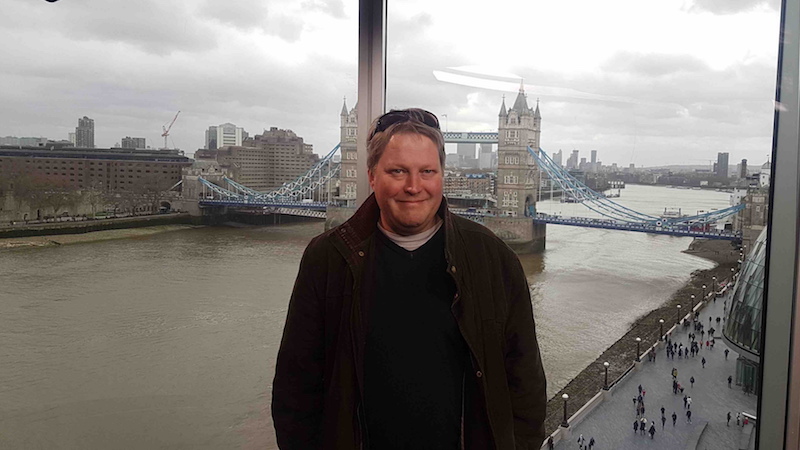 Ed making a funny face in the Tower Bridge studio

The live show will be hosted from an incredible studio overlooking Tower Bridge, and will see people like TV presenter Matthew Wright, journalist Fiona Armstrong and former Sky Sports presenter Keith Arthur anchoring it all as we visit some of the most amazing fishing locations that the world has to offer in a 24 hour live fishing extravaganza.

Keep watching the FishingTV social media channels and the World Fishing Day website for more updates about the locations, people and organisations who will be involved on the day! We’ve just created a Facebook profile frame that you can find on our page so you can let all your friends know that you’re supporting the day – all the cool kids are using it!