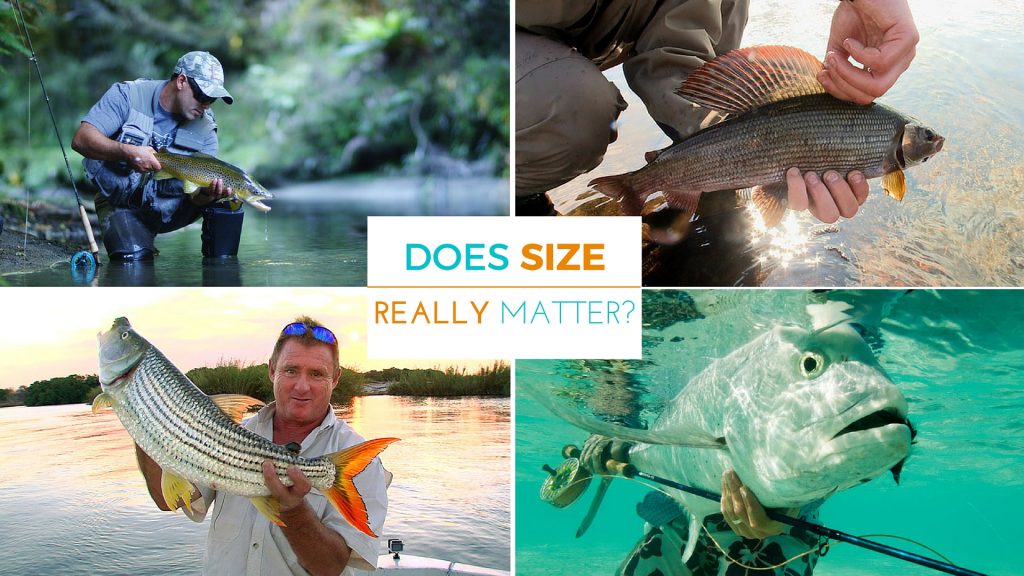 When we obsess over size, are we missing something

Lots of sports make use of arbitrary milestones to indicate success – scoring 100 runs in cricket, for example – and fishing is no different. With fishing the measure in question more often than not is size.

When size really mattered, when the catch was as often as not for the table or for sale, it is easy to see why big fish were prized above all, whether the 30lb carp or the 20lb salmon. However, now that so much fishing is on a catch and release basis, is this obsession with size not merely a rather crude way of keeping score?

Now, one might argue that it takes a different set of skills to land bigger fish, but does catching bigger fish make you a better angler? Sure, you’ve chosen your tackle and rig based on the type of fish that you are targeting, but that’s a fairly elementary part of fishing, hardly the mark of a serious expert.

Is it possible that a relentless pursuit of size has changed the way we fish and the way that fisheries are managed, and is it even damaging our sport? In the world of carp fishing, in which the largest specimens can fetch thousands of pounds for their breeder and be worth yet more to a fishery owner, there are enough reports of stolen fish and illegal imports that the potential for the spread of disease and the hybridisation of native species with imported strains is a real threat.

Witness, also, the change in the stocking of trout waters in the UK. Ed, Commercial Director at FishingTV, recalls when “coming home and saying ‘I caught a brace of trout’ would have been considered a good day, and those fish would have been 1 to 11/2 pounds. These days, fishing all day and only catching two feels like a failure, and the average size is huge in comparison.”

He does feel that a lake stocked with big fish presents a less ‘real’ challenge than fishing for smaller, wilder fish. That said, he acknowledges that in certain situations size can be an indicator of superior skill. “The biggest wild fish are always in the hardest to reach spots, always the hardest to cast to,” he moans.

But there may be a more philosophical reason to reject the all-out pursuit of size. We must ask ourselves as anglers, why we fish? It is no longer for the table in most cases.

There is a competitive undertone to the obsession with size that doesn’t seem to square with the desire expressed by many anglers to reconnect with nature and unwind. Indeed, if we are obsessing over the size of the fish that we catch, are we not neglecting the aspects of the sport that are really magical – being in nature, pitting one’s wits against a wild animal’s instincts, the intrinsic beauty of the fish we target?

We’re pretty confident that social media is having a noticeable impact on this, but the office is divided among as to what that impact is. There are those who say that social media encourages bragging and prompts anglers to seek the approval of others; and those who say that it has moved the focus away from the size of the fish, and towards its health and general photogeneity.

One thing we have noticed is that the terms used to describe big fish aren’t all that complimentary, or at least, they don’t sound like they are: pig, slob, lunker, pellet pig.

We’re confident that if you asked the stars of Fishing TV – the likes of Bill Boyce, Steve Townson, Des Taylor, Rae Borras and Chris Yates, all excellent anglers, brimming with skill and with plenty of big fish to their name – they’d tell you that size doesn’t matter – what counts is the experience, the emotion invoked by being in an amazing location, the thrill of the chase.

As with cricket – where the batsman who scores 100 receives general acclaim and praise but the one who gets out on 99 gets only commiserations when really the accomplishments are very much similar, the angler who can say that she’s caught a salmon of 20lb or a carp of 60lb walks that little bit taller than the one who has not. Rightly so – these are the so-called ‘fish-of-a-lifetime’. However, we think an angler who values size above all else is unwise. Sure, it’s interesting to know just how whopping that whopper was, but most of the time… we’re not so sure that size matters a jot.

There’s a place for competitive fishing – competitions – but outside that, what is to be gained by wrangling over an ounce or centimetre here or there?

You can find out what drives some of the UK’s most well-known carp anglers in our series Addicted to Carp. Chris Yates tells Ian Chillcott about his fishing life in ‘The World According to Chris Yates’, while films like ‘The Brothers Brown’ and ‘Musky Country’ offer insights into the motivations of fly fishermen of different stripes.