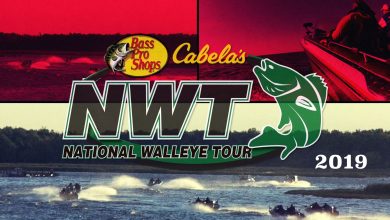 Follow the highlights of the 2019 National Walleye Tour featuring the four biggest events of the year. We start on Lake Winnebago, Oshkosh, Wisconsin where the largest field in NWT history, 166 teams of pro and co anglers have assembled to compete for the largest purse ever. Unseasonably cold weather means they have to try everything in their repertoire. The second stop is at Marinette on the Bay of Green Bay, part of Lake Michigan offering a huge area of water to fish, most anglers head north where there are some very large Walleye to be found. The third stop is at Sault Ste Marie in Michigan, it sits on the St Mary's River that runs the short distance between Lakes Superior and Huron, so the fishing opportunities here are almost endless. The tour comes to an exciting climax with the Tour Championship, this year held on Devil's Lake, North Dakota. 87 of the top placed anglers of the season take part in the first two days, with ten of them qualifying for the day 3 showdown where the Championship trophy and Angler of the Year will be decided.

To watch highlights of the 2019 National Walleye Tour now, just login or join 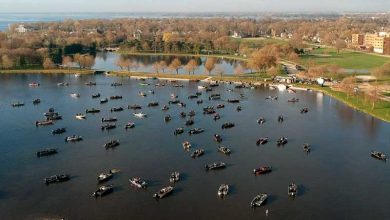 video
2019 Lake Winnebago Oshkosh
21:27
Highlights of the 2019 National Walleye Tour kick off on Lake Winnebago, Oshkosh, Wisconsin where 166 boats are competing over two days, with over half a million dollars worth of prizes up for grabs. It's early May and the water temperature is in the 50's, meaning that conditions are going to be tough. On day 1 there are a few early attempts at trolling but gradually the teams start stacking up on the most popular spots. At the weigh in only 23 teams had achieved a 5 fish limit and taking a narrow lead into the second day with a bag of just 14.79 lbs is local angler Tom Keenan. Although the weather is a lot more pleasant on Day 2, Tom thinks he just needs a bag of a similar weight to finish in top spot. But there are plenty of guys just below him on the leader board with other ideas. To watch 2019 Lake Winnebago Oshkosh now, just login or join 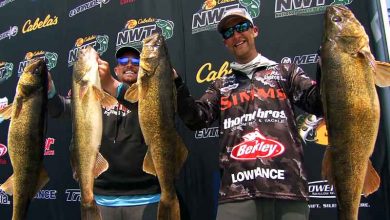 video
2019 Marinette, Green Bay
21:26
The 2019 National Walleye Tour moves on to Marinette on the Bay of Green Bay, part of Lake Michigan. Experience says that the Walleye are hard to find here, but the ones you do find are big, so watch out for some heavy bags at weigh in. The bay is 120 miles long so there are plenty of options open to the teams, but by heading north they are likely to find the really big Walleye. Day 1 proves to be tough, high water and lower than normal temperatures take their toll, but one man smiling at the end of it is John Hoyle, who with a bag weighing 41.37lbs takes the overnight lead. On day 2 he carries on with the same tactics, ripping lipless crank baits along sand and rock transition points. A lot of the other teams decide to troll, but not second placed Korey Sprengel, with only just over a pound to make up he too is casting crank baits. A couple of early fish around the 8lb mark put him right in the frame, but will John be able to crank his way to another big bagful? To watch 2019 Marinette, Green Bay now, just login or join 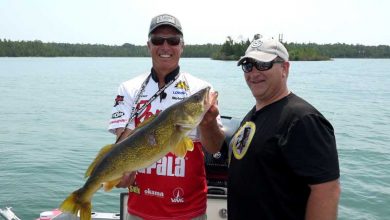 video
2019 Sault Ste Marie
21:26
The third stop on the 2019 National Walleye Tour is at Sault Ste Marie in Michigan. This fishing opportunities here are almost endless, as it sits on the St Mary's River that runs the short distance between Lakes Superior and Huron. It's not unheard of for competitors to travel over 100 miles to reach a favourite marque. Conditions on day 1 aren't ideal, as there is no wind and the anglers are presented with flat calm waters. Local pro David Atkinson starts by trolling spinners over an area of rock piles that he knows, but to little effect. One summer tactic that proves popular is "shivering" where a glidebait is jigged on deep structures. With less than half the field making the 5 fish limit, the overnight leader is David Kolb with a total of 30.97lbs. But sitting just behind him is last week's champion John Hoyer, hoping to go back to back. Whilst David is trolling, John is casting baits and after his co-angler Robert Olson hooks a couple of big ones early doors, it looks like game on! To watch 2019 Sault Ste Marie now, just login or join 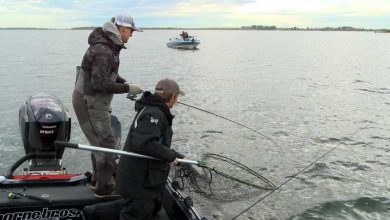 video
2019 NWT Championship Preview
21:27
In this 2019 NWT Championship Preview, we cover the largest event in the 2019 National Walleye calendar, the Tour Championship. This year it is being held on Devils Lake, North Dakota and carries the largest purse ever in NWT history. 87 of the top Walleye anglers in the country are here to battle it out over 3 days. There is a 5 fish limit on the first two days and then the top ten anglers will continue into Day 3. As well as the Championship trophy, the Angler of the Year Award will also be decided and coming into this meeting, last year's winner Brett King is again sitting in top spot. Can he do enough to retain the crown? High winds and rain affected pre-fish and storms are in the tournament forecast, so tough conditions lie ahead. To watch the 2019 NWT Championship Preview now, just login or join 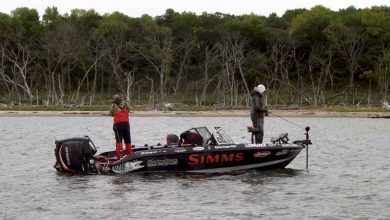 video
2019 NWT Championship Day 2
21:27
We continue highlights of the 2019 NWT Championship with action from day 1 and day 2 from Devils Lake, North Dakota. 87 of the top Walleye anglers from across north America have come together to decide who will be crowned 2019 Tour Champion and also who will become Angler of the Year. Conditions are wet and windy, so most anglers won't be travelling to too many spots, but trying to make the most of the ones they have recced in pre-fish. Mike Goffron heads the leaderboard at the end of the first day with a bag weighing in at 28.22lbs. When the anglers arrive for day 2 they are greeted by very strong winds, so tournament director Anthony Wright postpones the action for a day. Conditions are a lot calmer and a little warmer the following morning so it's all systems go. All the anglers will be hoping to net a full 5 fish limit to give themselves a chance of making the top 10 and qualifying for day 3. To watch 2019 NWT Championship Day 2 now, just login or join 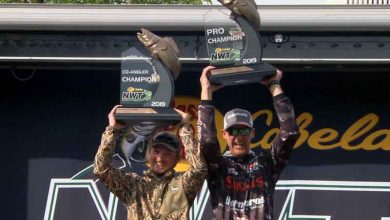 video
2019 NWT Championship Day 3
21:26
The 2019 National Walleye Tour comes to an exciting climax here on Day 3 of the Championship. 87 pro anglers started the event hoping to lift the Tour Championship trophy and 10 of them have made it into the third and final day. Conditions have been tough and anyone with a two day total over 36lbs has made it in. They are now looking to add to that with a full 5 fish limit. Dusty Minke is top of the leader board with 43.18lbs but close behind is John Hoyer who is on a hot streak having featured strongly in the last two events. Veteran Tom Keenan, has said he will retire at the end of this season, has extended his career by one more day having qualified in 8th place, he now looks favourite to take the Angler of the Year Award, which would be a fantastic way to bow out. To watch 2019 NWT Championship Day 3 now, just login or join