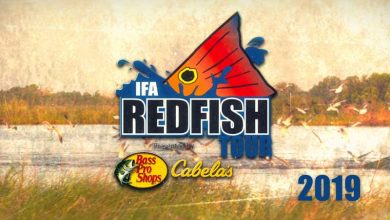 The IFA Redfish Tour is regarded as one of the top series of tournaments of its kind in the States and is certainly the most popular. It hosts a number of qualifying events in 5 regional divisions across the south east of the country, with teams vying to make it through to the Championship Final at the end of the season. In 2019 this was held at Venice in Louisiana, considered to be the best Redfish destination in the world. Most of the qualifying competitions are one day events where the teams of two anglers are looking to bag the heaviest total of two fish. Sounds easy, but all states impose a slot, outside which fish that are too small or too big must be put back. So the largest fish that count are either just under 27 or 28 inches, with the heart breaking realisation that something slightly bigger than this won't count. Anglers will try a variety of patterns, looking for something that works on the day, but generally they like to sight fish in clear water where they can see and cast to the shoals of Redfish.

The IFA Tour also includes events for kayak fishing, sponsored by Hobie and in this series we include the season finale Championship from Grand Isle, Louisiana as well as the Hobie World 8's, the world championships from Gold Coast Australia. 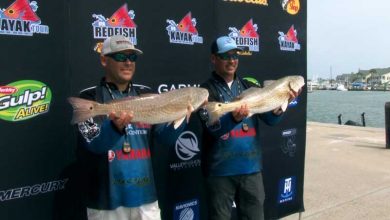 video
2019 IFA Port Aransas
21:26
Coverage of the 2019 IFA Redfish Tour kicks off at Port Aransas, Mustang Island on the Gulf Coast of Texas. 54 pairs have gathered for this one day event, looking for their best two Redfish in the 20-28" slot. Reports from the pre-fish days were encouraging with shoals of Shad seen moving in with the Redfish just behind them. This stretch of coastline offers a huge variety of potential locations, with the strong winds dying away some of the teams decide to head out into the open water of the gulf but others prefer the more sheltered conditions found inshore on the Laguna Madre. Metallic spoons are a popular lure, but the one that seems to be most successful is the Berkley Gulp, a selection of soft rubber baits. All the competitors know that they are going to need a couple of fish in the 8-9lbs bracket to stand a chance of taking home first prize. To watch 2019 IFA Redfish Port Aransas now, just login or join

video
2109 IFA Houma
21:26
The second stop on the 2019 IFA Redfish Tour is at Houma, Louisiana. This is regarded as one of the best inshore fisheries on the schedule, with a host of options available. This year though the area is recovering from a recent hurricane which has left high muddy waters in its wake, so the anglers will need to think hard on where they are likely to find the fish. There are 106 teams competing for a total purse of over $50,000 and they are all looking to fill a two fish limit from a 20-28" slot. We have two cameras out on the water, each with a featured team and they both get off to a flying start with some nice early fish, in one case just a bit too good, its always very frustrating when a large fish turns out to be just over the slot mark. In the murky waters the guys are tending to use darker colours on bigger lures in an attempt to attract the fish, the general consensus is that it's going to be tough To watch 2109 IFA Houma now, just login or join 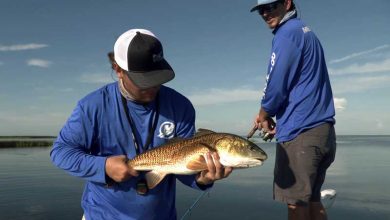 video
2019 IFA Steinhatchee
21:27
In this episode the IFA Redfish Tour 2019 visits Steinhatchee Florida, a quiet fishing village on the Gulf side of the upper peninsular. It has recently been hit hard by storms, so much of the area is underwater with a clean up operation in progress. That's not put a stop to the fishing though and 99 teams have gathered at the legendary Sea Hag Marina, in the hope of netting the biggest total weight of a 2 fish limit in this one day event. The flood water has devastated the shallow bays, so the teams are expecting to make long runs to find clean water. One of our featured pairings is Justin Blanton and Billy Emerson, they're fishing in their first ever tour event. Their first reaction is "Man! There's a lot of boats... This is different", it will interesting to see how two novices handle the pressure. Our other featured pair, Adam Davis and Michael Neu have slightly more experience, they're planning to head off in order to find clear water where they can spot bait fish and then plan to spend most of day casting surface lures. Will either of them manage to fill a big bag? To watch 2019 IFA Steinhatchee now, just login or join 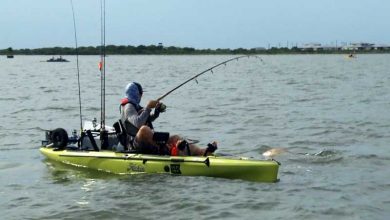 video
2019 IFA Kayak Championship
21:27
The 2019 IFA Kayak Championship comes from Grand Isle, Louisiana. Competitors have qualified through regional events throughout the southern states and at stake is a place in the Hobie World Championships. The format here in Grand Isle is a two day event where the anglers are looking for the largest total weight from one Trout and one Redfish each day. From the outset the conditions are choppy in anticipation of the storm forecast for day two, so a big soft lure on a heavy weight is the preferred pattern, getting bait down deep along the channel where the shoals feed. There are some big Redfish to be had with a few competitors breaking their pb's, so expect some big totals come the final weigh in. There are also highlights of the Hobie Fishing World 8's from the Gold Coast of Queensland Australia, where 8 man teams from around the globe competed over 3 days for the title of World Champion Kayak Fisherman 2019. We also pay a visit to the ICAST exhibition 2019 held in Orlando, Florida to take a look at the new Hobie Mirage Drive 360 which takes the control of a kayak to another level. To watch 2019 IFA Kayak Championship now, just login or join 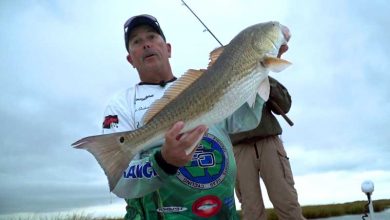 video
2019 IFA Georgetown
21:26
The IFA Redfish Tour heads to Georgetown, South Carolina for the last stop in the Atlantic division and a last chance to qualify for the season's grand finale, the Championship. 62 teams are signed up and ready to enjoy a day's fishing in great conditions, with beautiful clear blue skies. One of our two featured pairs Tony Gaskin and Dan Connolly head off down the river into open ocean, hoping to head through a cut in a sand bar to access a backwater they are sure is holding fish, but they can't see the cut through the breakers and decide to fish some structure until the tide rises enough. The Redfish around here aren't massive and it's expected that any total over 8lbs will be right up there. We also take a look at the evolution of the Power-Pole which is celebrating its 20th birthday and has become an essential piece of kit for any tournament angler since it was invented by John Oliverio back in 1999. And there's a short preview of the Championship Finals from Venice Louisiana. To watch 2019 IFA Georgetown now, just login or join 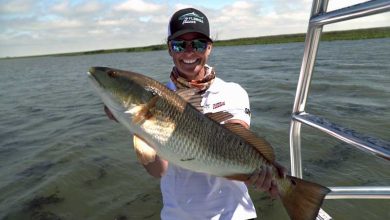 video
2019 IFA Redfish Tour Championship
21:26
The 2019 IFA Redfish Tour Championship comes from Venice, Louisiana, the premier Redfish destination in the States. 115 teams have qualified through the 5 regional divisions and they are going to be competing over two days to see who can bag the largest total weight of two fish each day. The Louisiana slot is up to 27", so anyone getting over 15lbs a day will stand a great chance. The preferred pattern is sight fishing, but high winds, heavy rain and rising water are in the forecast, so some deeper blind fishing may be needed. At the end of day one husband and wife team of Jimmy and Angela Adams hold a small lead over Kristian Robert and Fred Peterman and with them both bagging a couple of decent fish early on day two, it looks like it's going to be a straight shoot out. To watch 2019 IFA Redfish Tour Championship now, just login or join